Mr El-Tawil is a Consultant Orthopaedic Surgeon who specializes in knee and hip reconstruction and trauma surgery.  His NHS base is at London North West University Healthcare Trust, whilst his private practice is at the Clementine Churchill Hospital in Harrow. 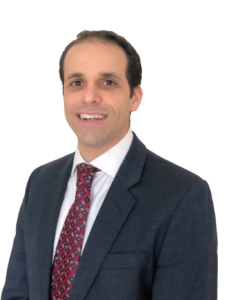 He has specialist experience in complex knee and hip surgery having worked alongside some of the most renowned orthopaedic surgeons in the world, in 3 prestigious international fellowships at:  The Sydney Orthopaedic Research Institute (SORI) in Australia, the Royal Orthopaedic Hospital in Birmingham, and the Nuffield Orthopaedic Centre in Oxford.  At these centres, he mastered state-of-the-art techniques in knee and hip surgery directly from pioneer surgeons; he continues to perform these latest techniques for his current patients.

His undergraduate years were spent at Guy’s, King’s & St Thomas’ Medical School in London where he graduated in 2005 with distinction and a 1st Class Honours BSc degree.  His higher surgical training was on the Royal London Orthopaedic Rotation where he developed advanced skills in trauma surgery.

He was awarded fellowship of the Royal College of Surgeons in 2014, entering the GMC Specialist Register in 2015.  Completing an MSc in Trauma & Orthopaedics at The Royal National Orthopaedic Hospital, he was awarded the Highest Achiever Prize for his work into computer assisted knee surgery.

He is the recipient of multiple national and international awards, most recently the Royal Society of Medicine President’s Prize for work into patient outcomes following knee replacement.  He is an examiner on numerous orthopaedic courses and is the author of several research publications including a major Cochrane Review, and the Unhappy Knee for which he received the Best Arthroplasty Paper award whilst in Sydney. He is the Lead for Patient Outcomes following knee and hip replacements at London North West University NHS Trust.